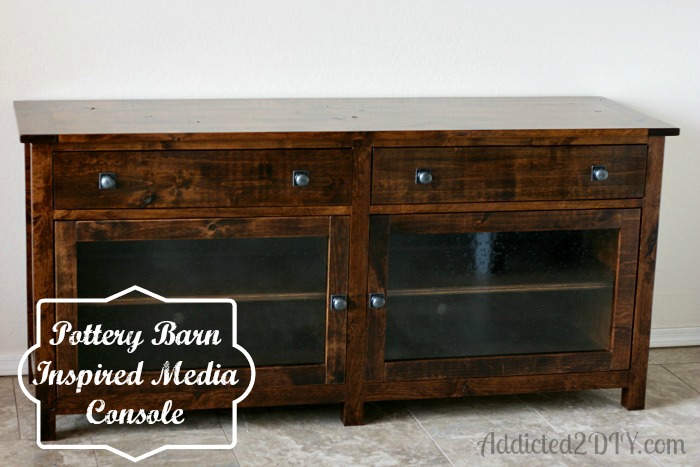 I am beyond excited to share our new media console with you today.  I have been wanting to build this for over a year and a half.  The second I saw the Benchwright TV Stand in the Pottery Barn catalog, I fell in love with it.  The best part is that Ana White already had plans for it on her website!  It had been a while since my husband and built a project together, so it was fun to finally get to work together on something again:) 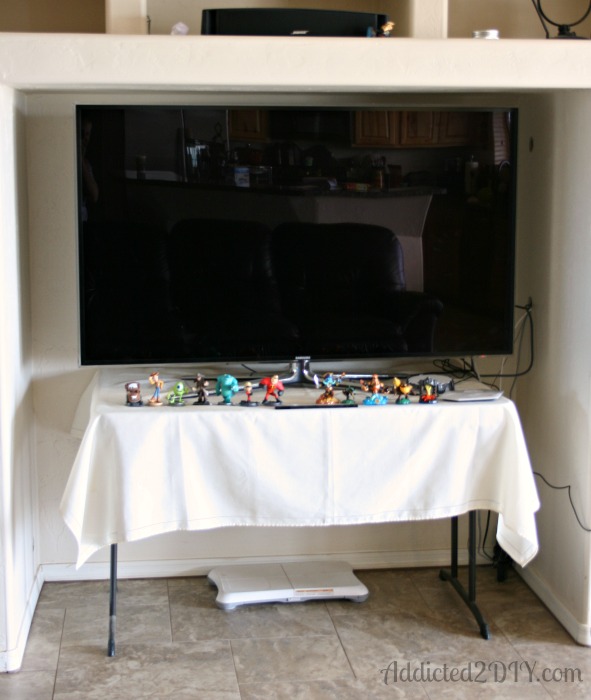 Part of the reason I’m so excited to show off our new media console, is because we’ve been living with THIS for the past year and a half.  I call this look the “high-tech redneck.”  Classy, huh?  The tablecloth really dresses it up.  We used to have a rear projection big screen TV, which fit perfectly in this space.  We had been wanting a new flatscreen for a while, but we don’t take large purchases lightly.  We do A LOT of research before we shell out any cash for anything like this.  When the Best Buy a mile from our house decided to shut its doors, we lucked out and found the exact TV we wanted on clearance!  Unfortunately, we didn’t have anything to put our fancy new TV on, so this is how it sat.  My husband had other projects in mind before he wanted to build this console, so it was put on the back burner for a while.  Now I am so proud to say that the folding table is out and the console is in!

You can find the exact plans here; however, we modified ours a bit and made it bigger.  We decided to make it the same dimensions as the Pottery Barn version.  That size fit better into our media center opening and didn’t leave very much space on either side. 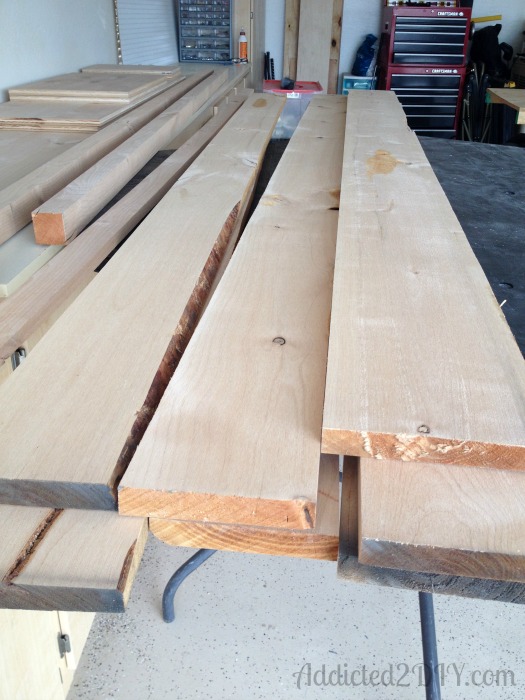 Another thing we did differently from the original plans was to use true to size lumber.  We purchased some beautiful knotty alder boards and plywod from our local Woodworkers Source.  The cost was either comparable or cheaper than buying the select pine from Home Depot or Lowes.  Of course, this meant a lot of forethought with our measurements and cuts.  Everything had to be changed up to factor in the larger lumber dimensions as well as the larger dimensions of the finished console. 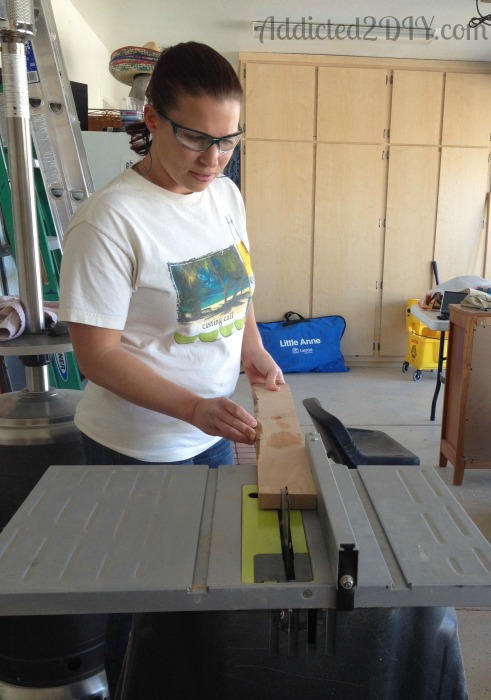 We also had to rip the boards down to the dimensions needed.  It was extra work, but for us it was totally worth it in the end. 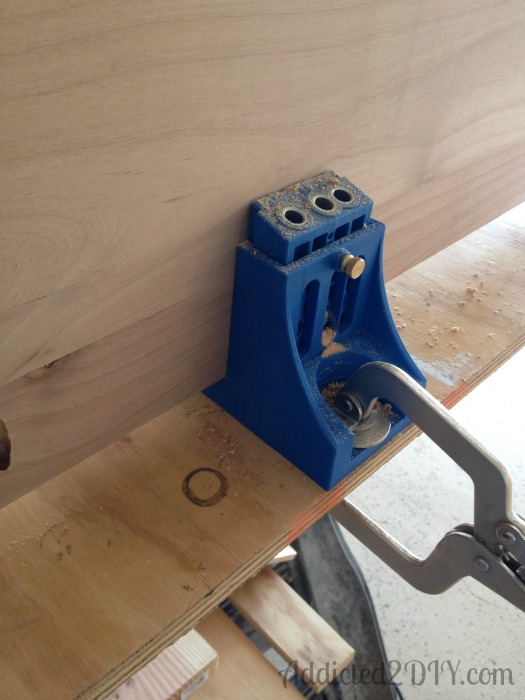 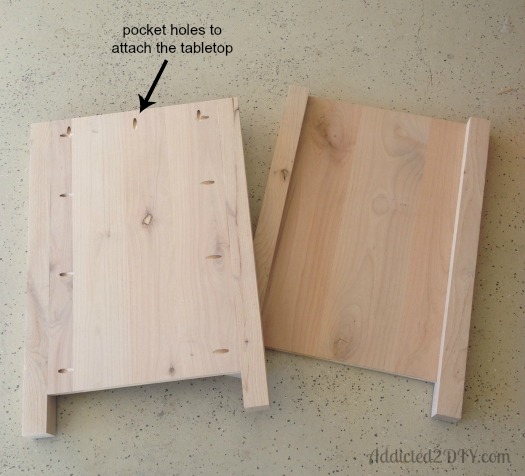 For the sides, we glued and clamped the legs to the plywood and then used 1 1/4″ pocket screws to attach them.  The plans don’t show it, but you’ll notice we also drilled pocket holes going up on the plywood.  This way we have a way to attach the top when we’re finished. 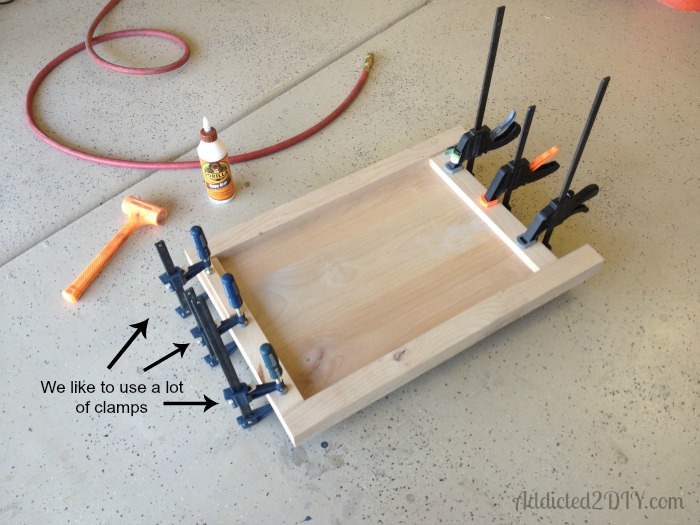 We clamped and glued the trim pieces to the sides and then used our nail gun and 1 1/4″ finish nails to attach them from the inside.  This way the nail holes were hidden. 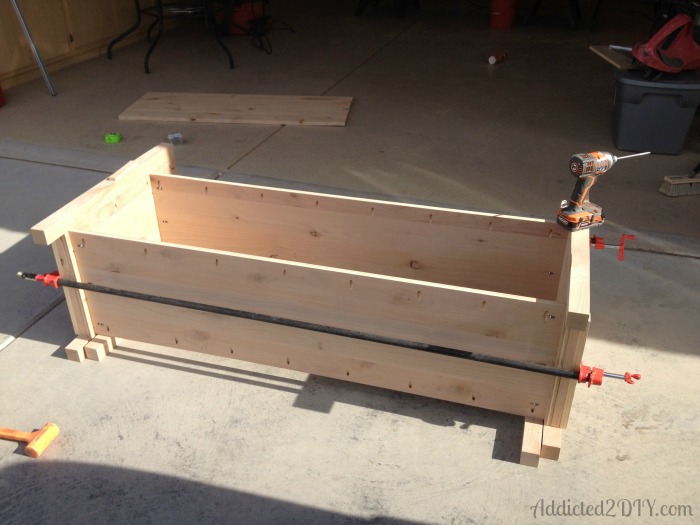 The next step was to assemble the body of the console.  It’s basically a plywood box that is trimmed out. 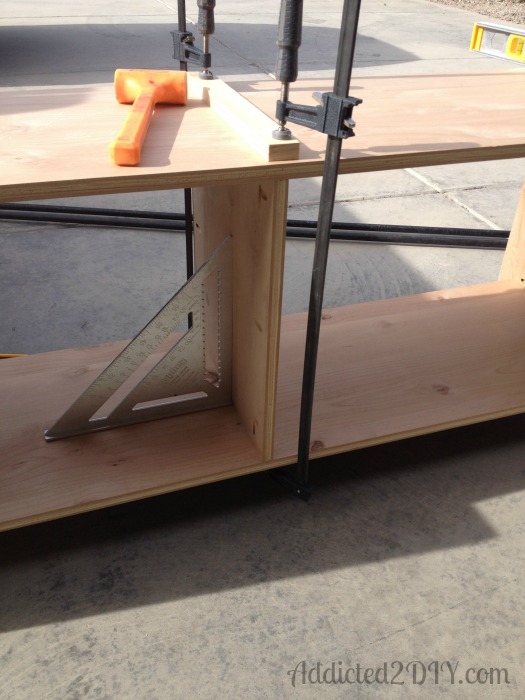 After the main body of the console was assembled, we added the center divider for the bottom portion of the console, squared it up and screwed it in. 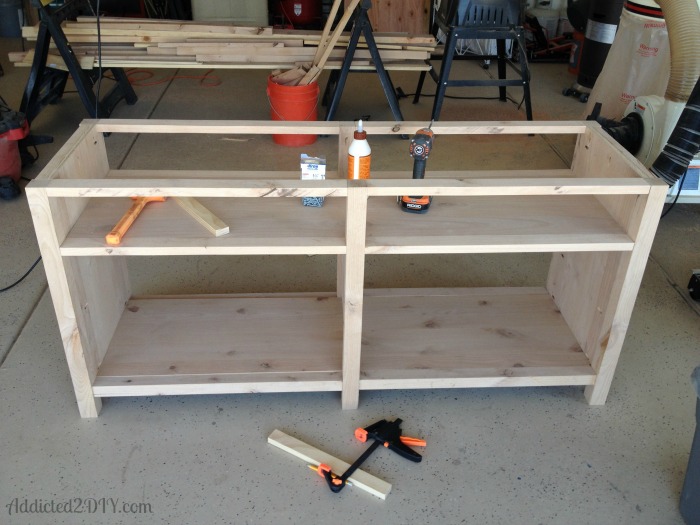 We attached the center legs and the front and back trim pieces.  At the top of the center legs, we also drilled pocket holes to enable us to attach the table top. 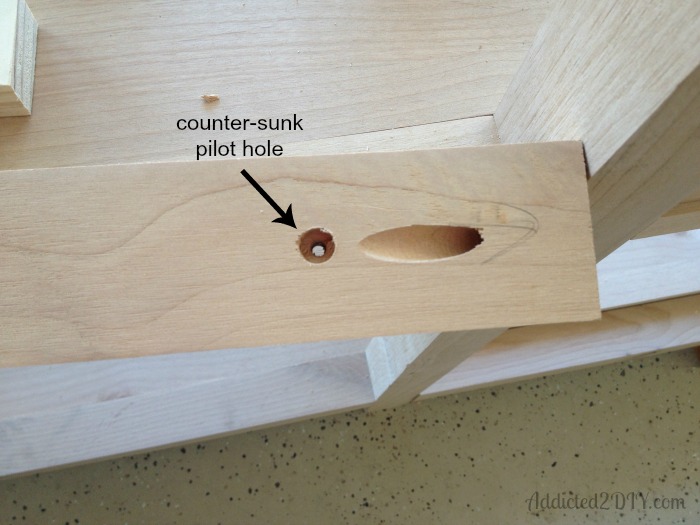 We like to err on the side of caution with things like this, so for the top trim pieces in the front and back, we made some counter-sunk pilot holes.  This console is heavy and, while we aren’t going to be picking it up and moving it around, we wanted to make sure that if it is ever picked up, the top isn’t going to snap off. 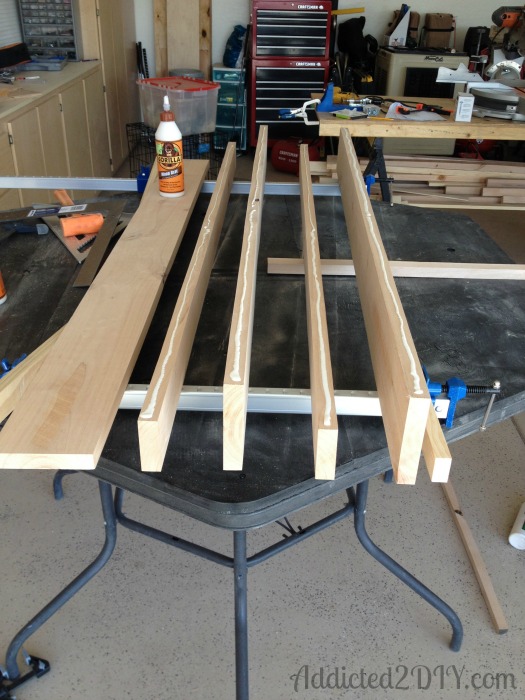 For the tabletop, we also modified the plans.  We went with glued boards and breadboard ends, rather than a framed piece of plywood.  We glued the pieces much like I did when I built this butcher block island top. 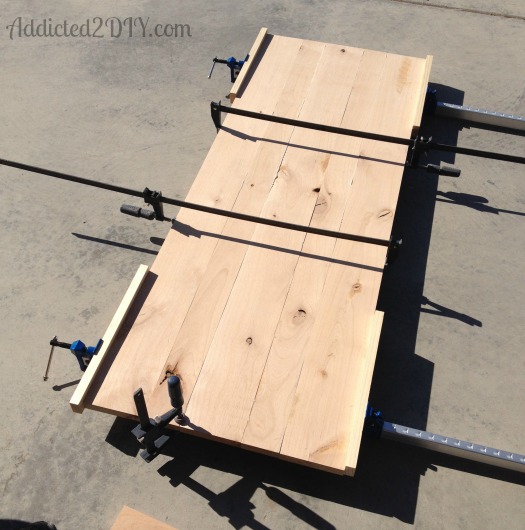 We clamped everything together and let it dry for 24 hours. 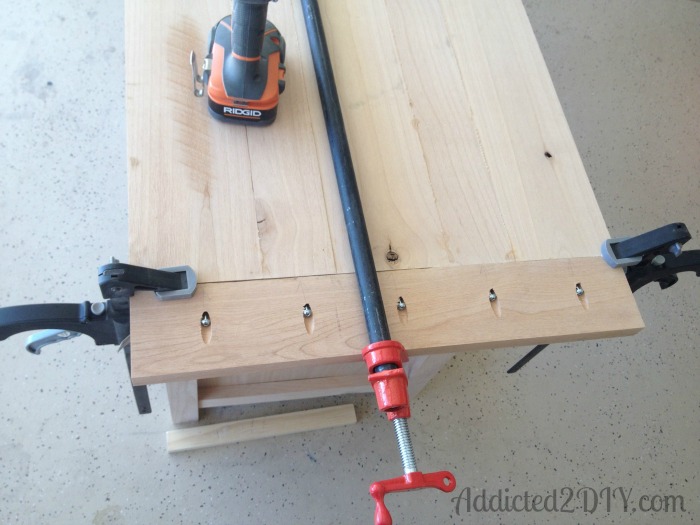 The breadboard ends were attached after that and it was ready to be sanded. 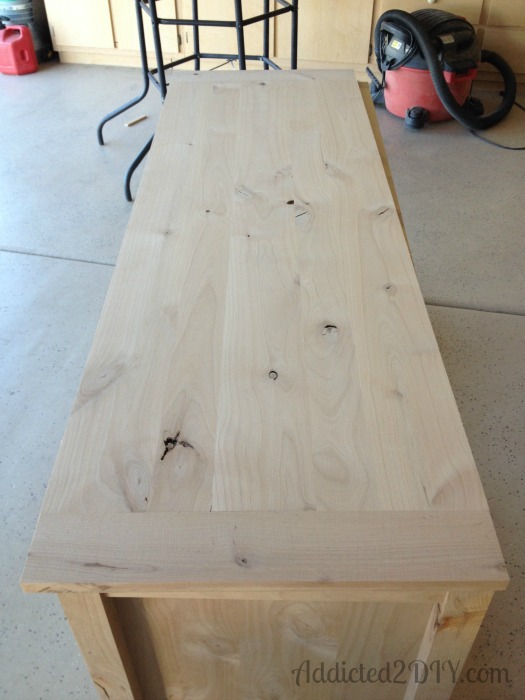 I headed back to Woodworkers Source to have the top sanded in their 36″ belt sander.  This could also be done by hand with a small belt sander, but it was well worth the $15 for them to do it for me. 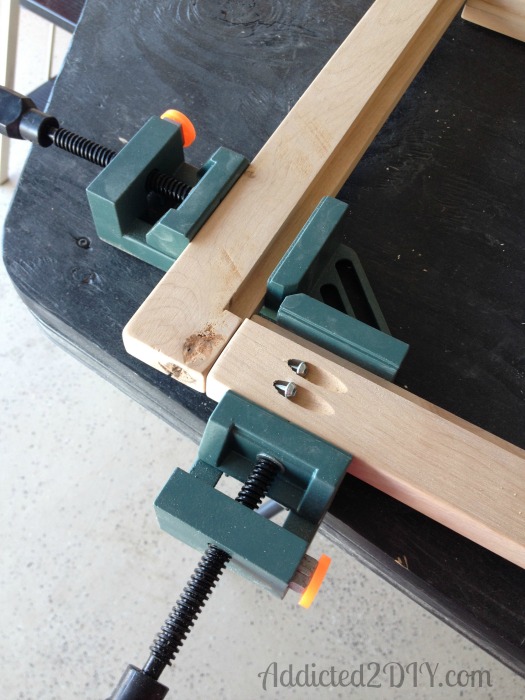 and 1 1/4″ pocket hole screws.  We also cut the pieces for the flip down doors. 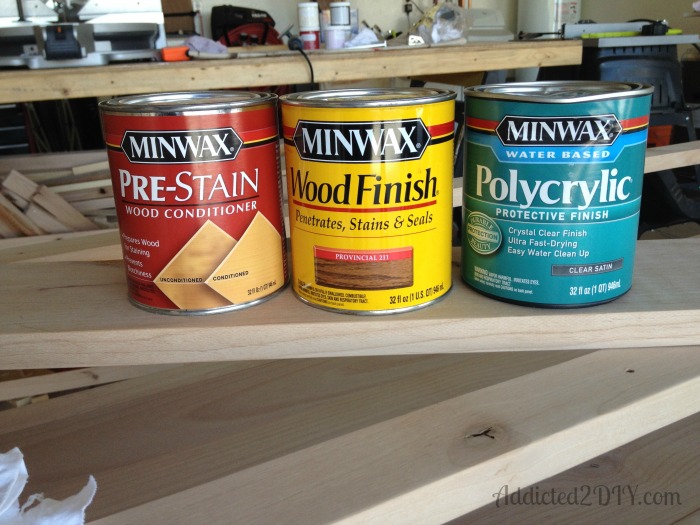 I used our favorite Minwax products to finish the assembled console.  Our favorite color is the provincial stain.  We’ve used that on the other furniture pieces we’ve built. 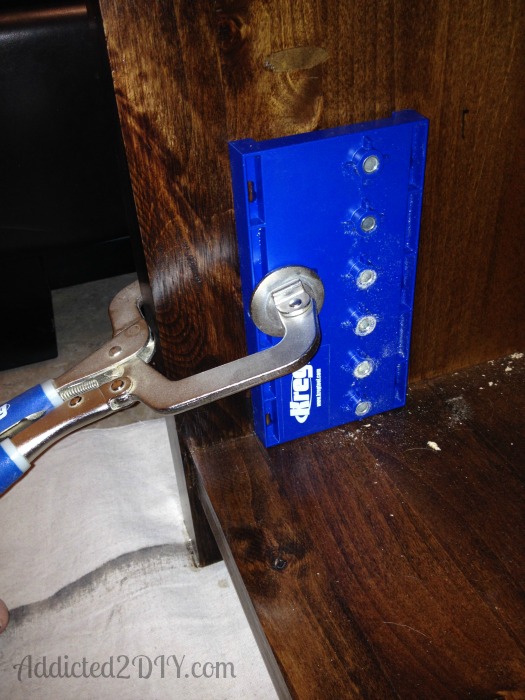 For this project, we wanted the shelves on the lower part of the console to be adjustable.  My husband at first was going to try to figure out a way to drill them himself, but I convinced him that we should really buy the Kreg Shelf Pin Jig

.  After we were done, he was thoroughly impressed with how nice the holes looked.  We’re definitely glad we purchased it.  For the holes, we sat it flush with the bottom of the console and drilled a hole into the top hole.  We then used the locating pin and moved the jig up and used that as our guide for the next three holes.  The holes came out perfectly! 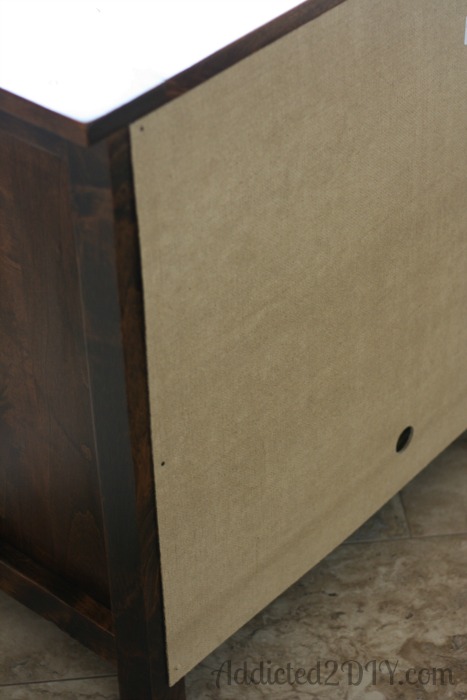 We attached the doors and then attached the top to the console.  The backing was the last piece.  We used a 1/8″ piece of hardboard for it and I stained the inside of it.  We drilled holes for the electrical plugs and then nailed it to the back of the console. 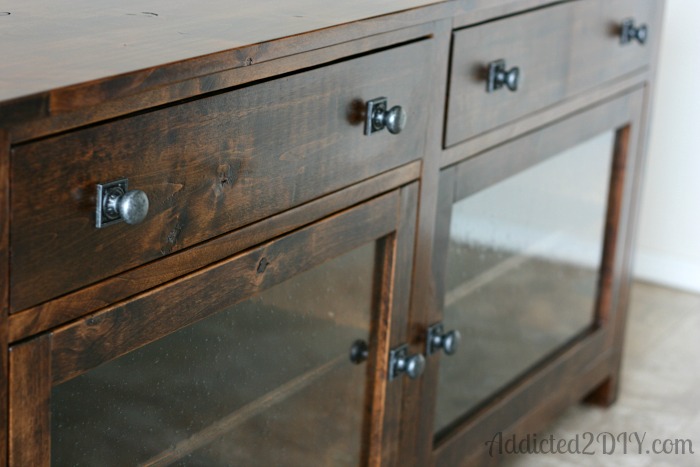 We purchased the knobs from Build.com and I love how they look. 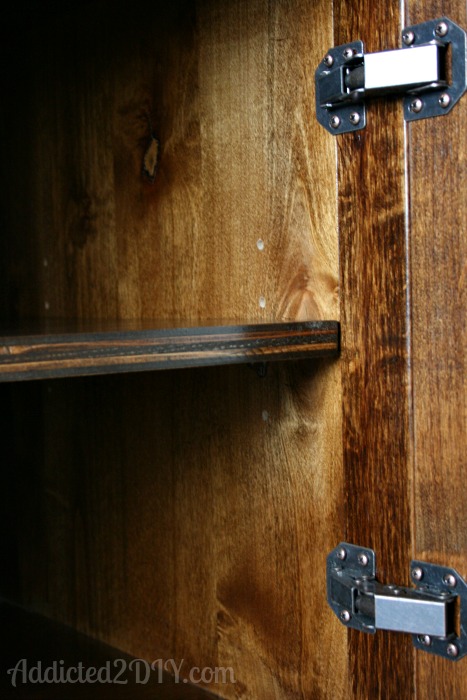 We used these euro-style hinges; however, they have a bit of play in them, which doesn’t bode well for our large, heavy cabinet doors.  I think we will probably end up replacing them with flush-mount hinges or a mortised hinge. 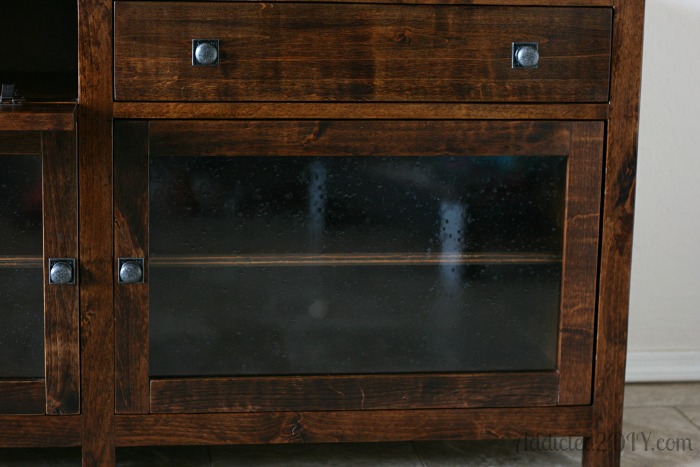 I really wanted to have the bubbled glass for the doors.  In my head it was the perfect look for this console.  My brother-in-law works for a glass company, so he was able to order the glass for us and he kindly installed it for me:)  I’m pretty sure I would have ended up with a mess of silicone everywhere had I done it.  The finished look came out exactly how I had imagined and I love it! 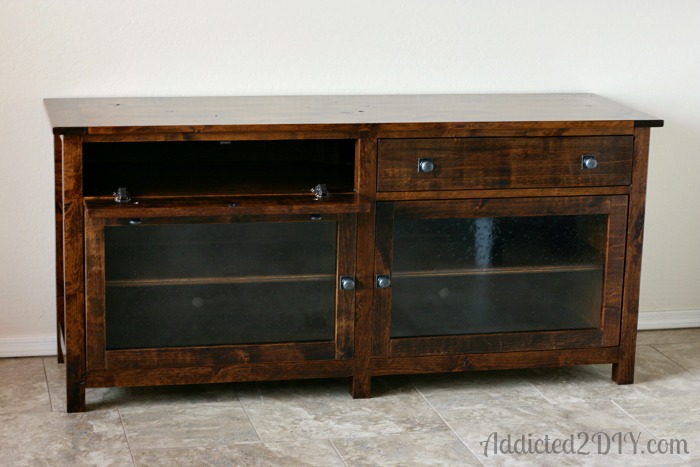 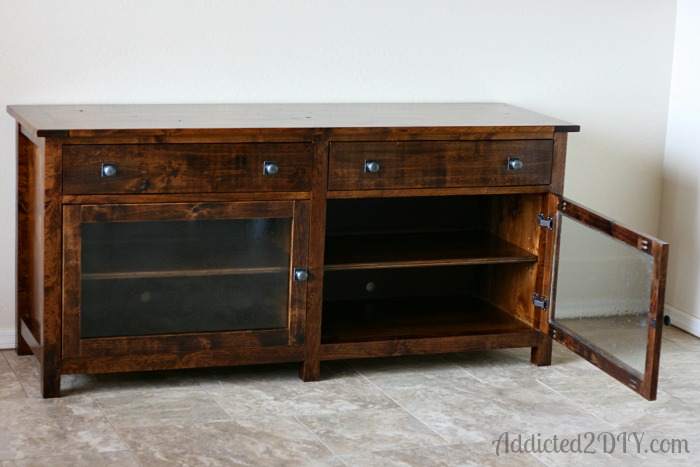 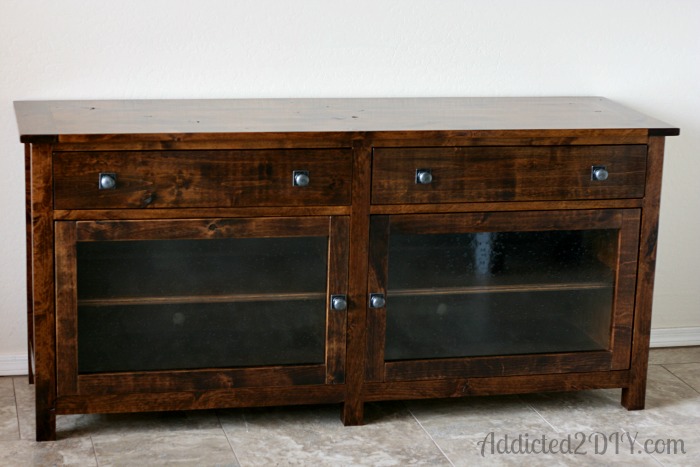 I am so happy with how it turned out!  I told my husband that this was definitely my favorite furniture project to date.  We have it in place in our media center now, but the stereo system has to be rewired before anything can be put in it.  Once that is done, I will be posting an update of it’s final resting place in our great room:)

Don’t forget you can get the full plans and instructions from Ana White here.

{this post contains affiliate links, which at no additional cost to you, I will receive a commission on products purchased from some of the links}

You can find me linking up over at these parties:

Remodelaholic,  Tatertots and Jello, Whipperberry, Put A Bird On It, DIY Showoff, The Hankful House