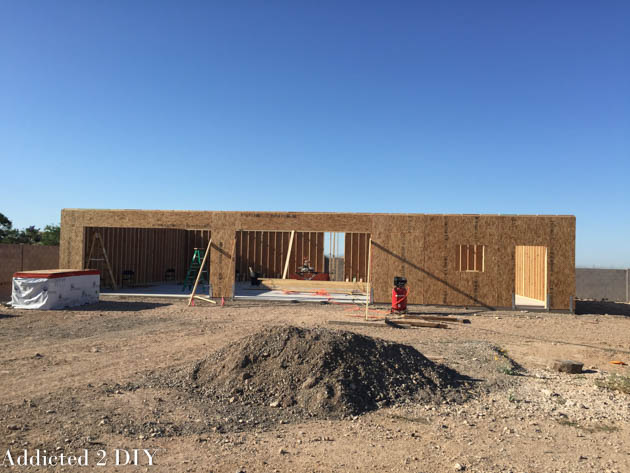 This past weekend, we began our biggest project ever!  We started framing the shop my husband has been dreaming about for years.  At 2,400 square feet, it’s bigger than our house, which is 2,200 square feet.  I personally didn’t think it needed to be bigger than our house, but I guess men think differently than women when it comes to these things.  That just means I get half of it, right?  We got a lot of comments from friends telling us we were nuts to try to frame it ourselves, but after getting a few quotes in the range of $8,000 to frame it, we decided pretty quickly that we would be the ones building it.  My husband used to work for a framing company almost 20 years ago and I had done a little when I was a teenager, so how hard could it be? 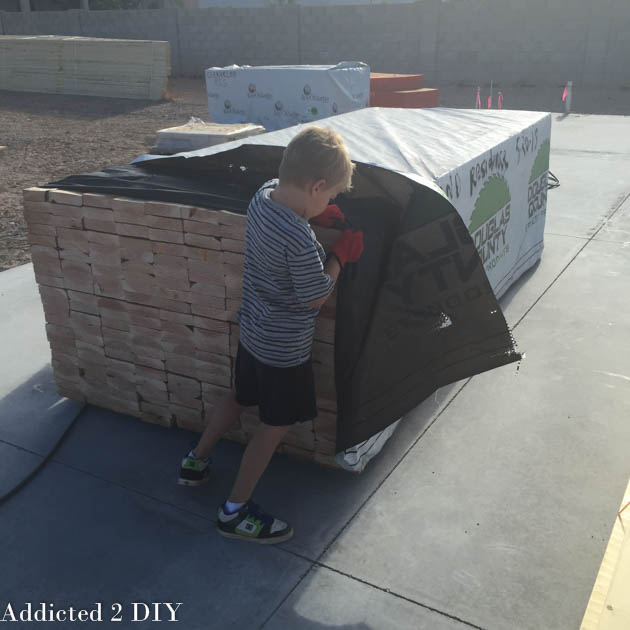 We started bright and early on Friday morning with a skeleton crew of my husband, our boys and myself.  I’m sure the boys thought it was pretty awesome to begin their summer break with hard, manual labor.  They actually were pretty excited to help us, so they woke us up before our alarms even went off that morning.  My mom joined us an hour later and my dad joined us a few hours later too.  It’s only slightly awkward to have your divorced parents working side by side helping you out. 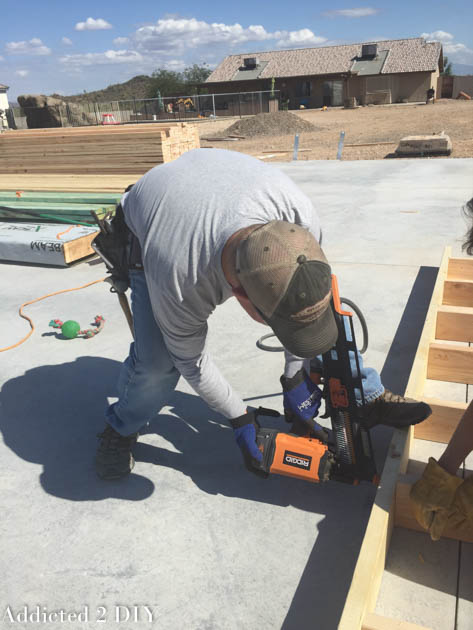 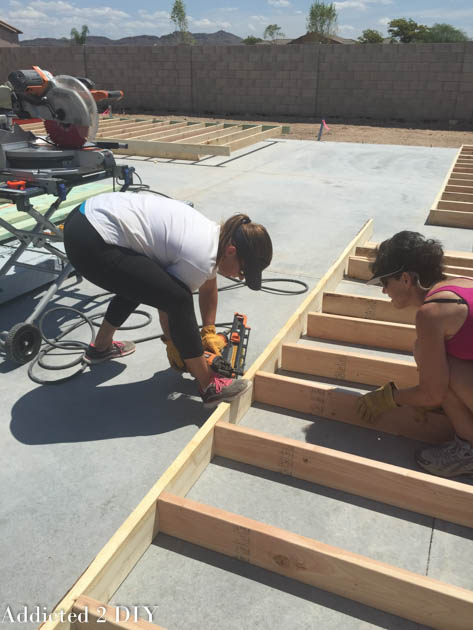 We framed up several of the wall sections and then raised them up and set them.  Framing is actually pretty rewarding in that sense, because you see so much progress as you go. 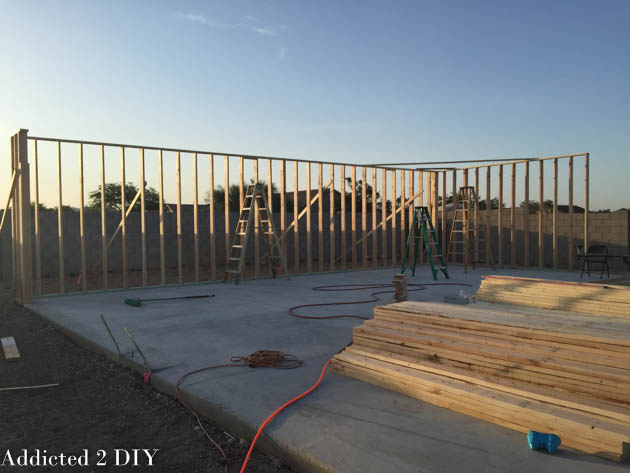 By the end of day one, we had one whole side standing.  We would have had more, but at one point that evening, my husband, mom and I were about to stand a wall up and I said “hey, weren’t we supposed to add the foam seal plate under all of these walls?”  My husband couldn’t do anything but start laughing.  It’s pretty much par for the course whenever we work on a project that there will be some sort of mistake that has to be corrected.  The good news is that we got really good at taking walls down and standing them back up:)  The the other good news is that we discovered our mistake before we got more of the walls up. 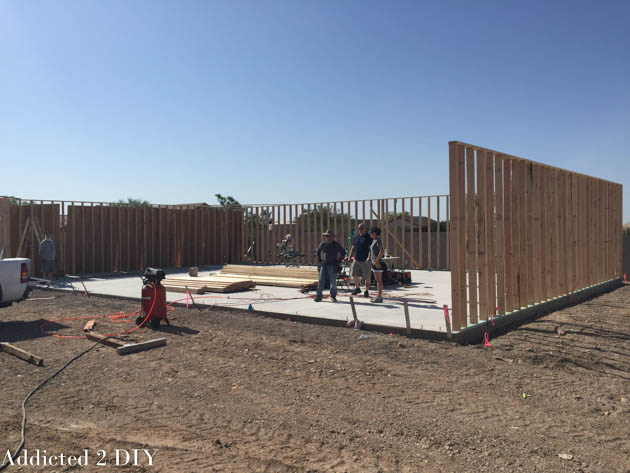 Day two started up with where we left off.  We built more wall sections and got them standing.  We were fortunate to have a handful of friends (and my parents) who didn’t go out of town over the Memorial weekend, so they were amazing enough to come help us out. 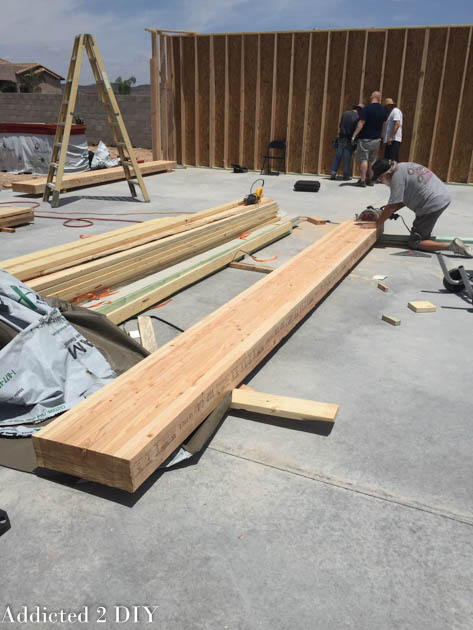 The one part of the build that was giving me nightmares were these beams.  They’re 6×18″ beams that spanned 16 feet for the garage door headers.  I was so nervous about getting these set because we didn’t have a crane.  Just brute strength. 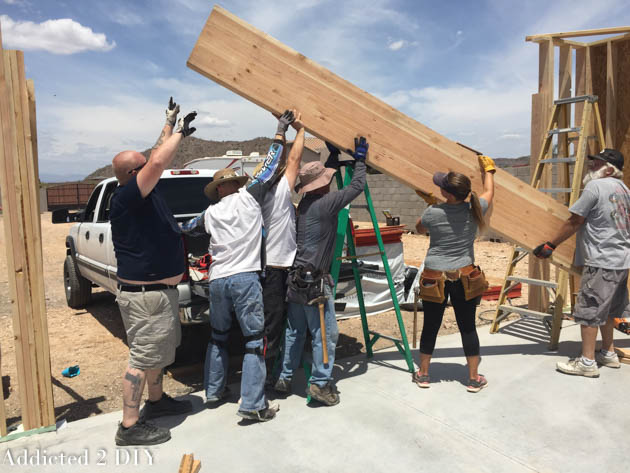 My mom was snapping pictures while we were raising the first beam and happened to capture us inadvertently reenacting the Marine War Memorial.  I was cracking up when I looked through the pictures later that night and made sure to send it to my brother-in-law who is a Marine:) 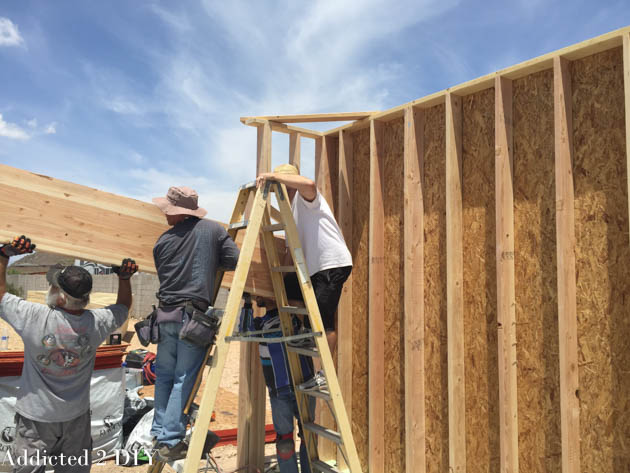 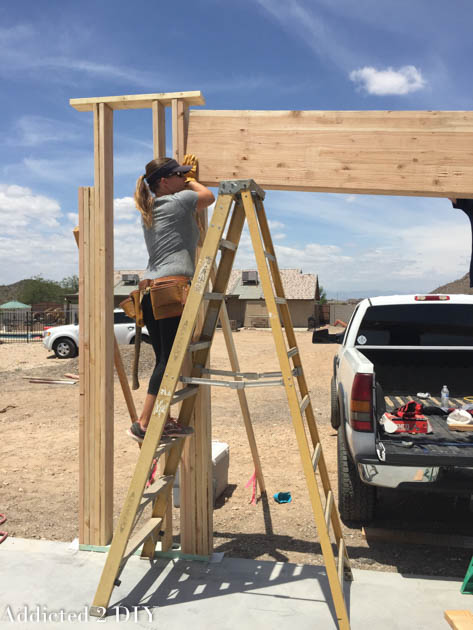 We thankfully got the first beam up without incident, using 6′ ladders as a fulcrum to raise the first end into its pocket.  The second beam went up in the same way, but then we realized after it was set that the top was on the bottom and apparently that matters.  That began the terrifying job of rolling the beam to correct it.  My heart was pounding out of my chest, but we got it done.  We all were ready for beers after that was done, so we called it a day and cooled off in the pool. 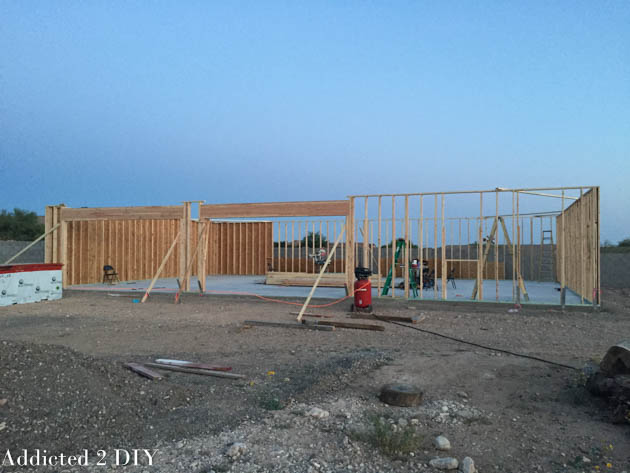 Our progress after day two had four walls up, beams set, and some of the shearing done. 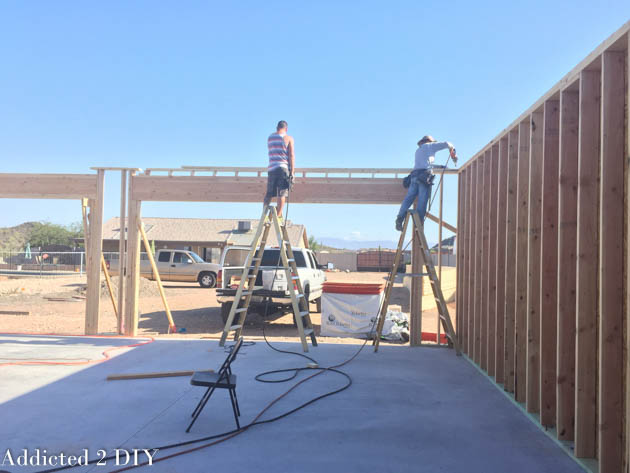 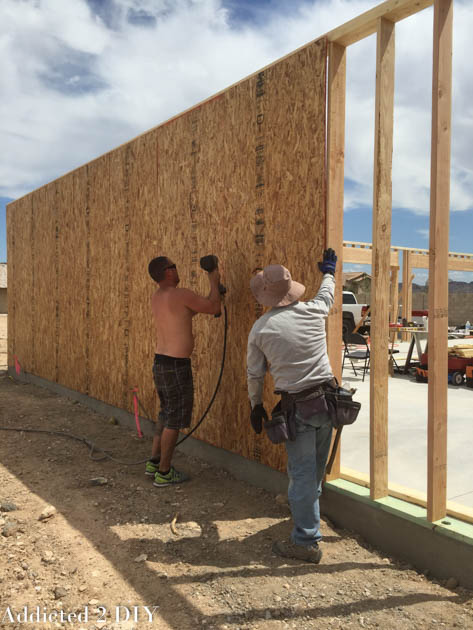 Day three didn’t have as drastic of a change, but we got a lot done, including some more shearing, the cripples above the garage doors, and the headers done for the man door and windows. 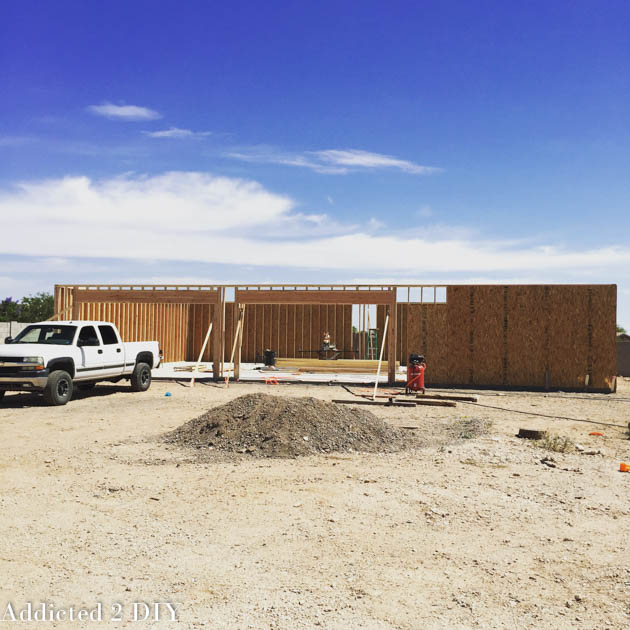 Our progress after day three.

Yesterday was our oldest son’s birthday, so we decided we’d only work for a few hours and then quit and enjoy the day with him.  We finished nailing almost all of the OSB panels, and started planning for the trusses, which will be going up next weekend.  We decided that we will take the rest of the week off.  Exhaustion didn’t even begin to describe how we were feeling after the long weekend of building.  It’s pretty awesome, though, to see it all take shape and know that we did that.  We can’t thank our friends and my parents enough for helping us this weekend.  We wouldn’t have gotten anywhere near as far as we did without their help.  I’ll be sure to share more progress next week after the trusses are up!