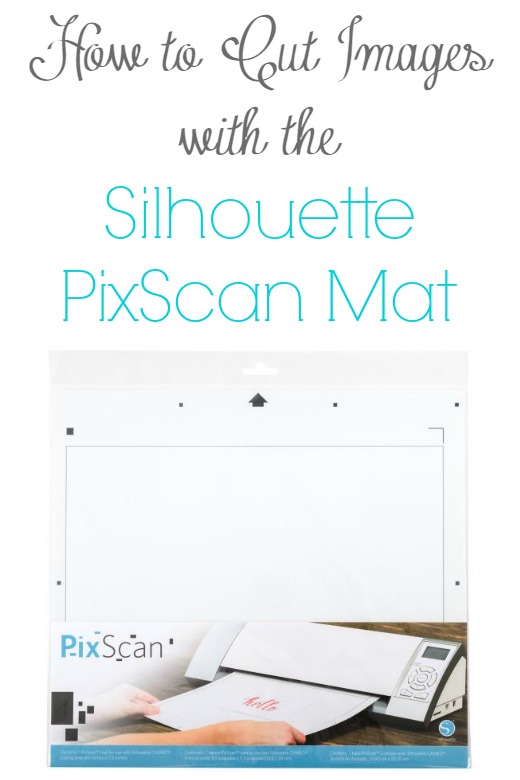 Hey there everyone!  Happy Wednesday.  It’s especially happy for me since today is also my birthday:)  Remember yesterday when I shared this fun Magnetic Build a Jack-O-Lantern Activity for Kids?  I promised I would share a tutorial on how I used the Silhouette PixScan cutting mat and today I’m delivering on that promise!  Last month, Silhouette America released this awesome new tool to use with the Silhouette Cameo and Portrait.  When Silhouette was kind enough to send me a machine to review, I immediately went shopping for a few other tools and materials and bought the PixScan mat.  After being so limited with my old cutting machine, I was beyond excited for the opportunity to finally be able to use a machine that wouldn’t limit my creativity.  My Cameo has lived up to my expectations and beyond, and I haven’t even scraped the surface of what it’s capable of!

On to the tutorial!  This post may get a little lengthy with pictures, but I promise that the PixScan cutting mat and feature are actually extremely easy to use!  I’ll start by saying that it comes in two sizes.  One is compatible with the Silhouette Portrait machine and one with the Cameo.  The cutting area is 8 1/2 x 11, which allows you to use a standard printer to print out images and then cut around them. 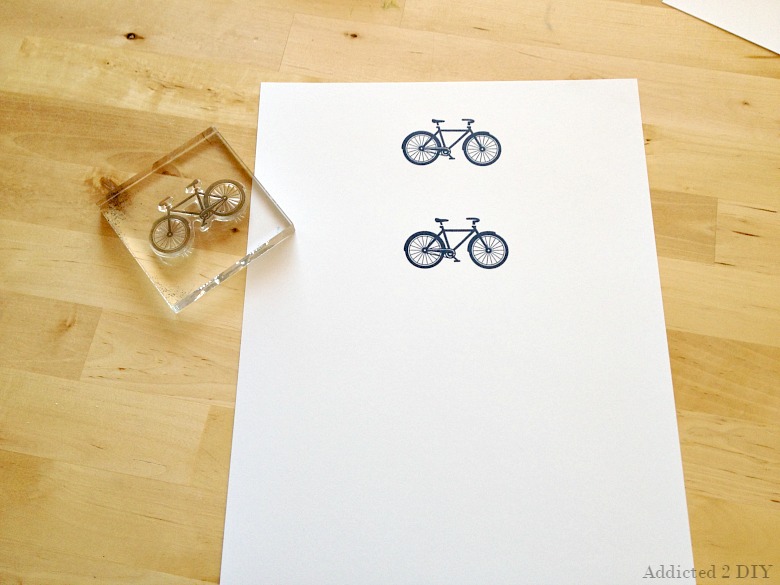 For this tutorial, I decided to use a stamped image.  I chose one that had some detail to it so you could truly see the capabilities of this feature.  I stamped two images to also show the different types of cuts you can do using the PixScan. 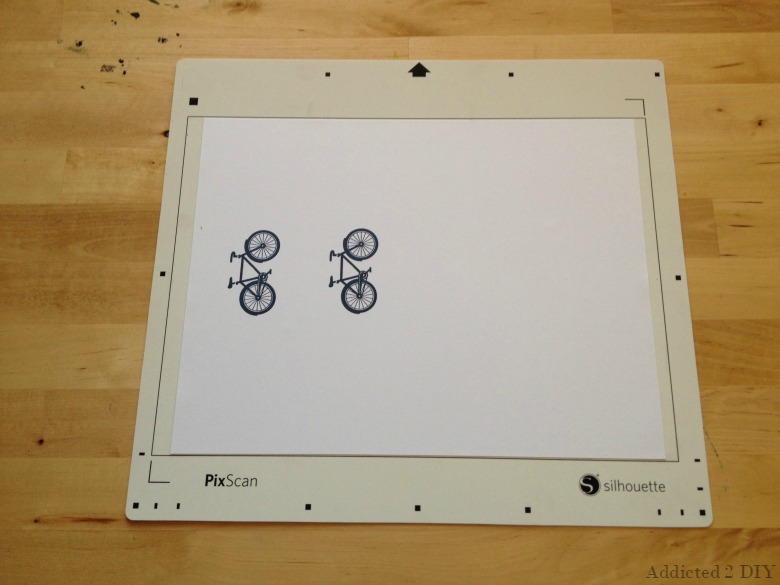 I placed my cardstock in the cut area on my PixScan mat.  This image is straight out of my iPhone.  The picture isn’t the greatest, but I purposely wanted to show that it doesn’t have to be an amazing picture in order for this to work.  The picture is also taken at an angle.  They can be taken at an angle or straight above and the images will upload to the Silhouette Studio.  You can also scan your images using your scanner as long as it is able to capture the entire mat. 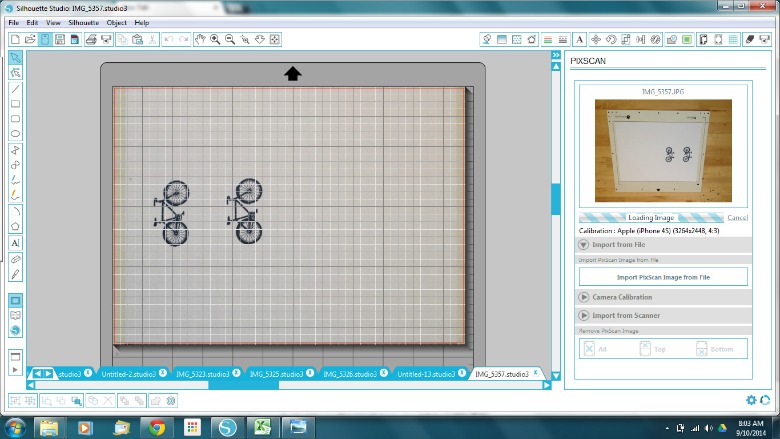 I plugged my phone into my laptop and uploaded the image.  I then clicked the PixScan button in my Silhouette Studio.  You can see it highlighted in blue at the top left of the toolbar.  I clicked the button to import the PixScan image from file and chose my picture.  You can see that it automatically flips the image, straightens it, and makes it ready for you to trace. 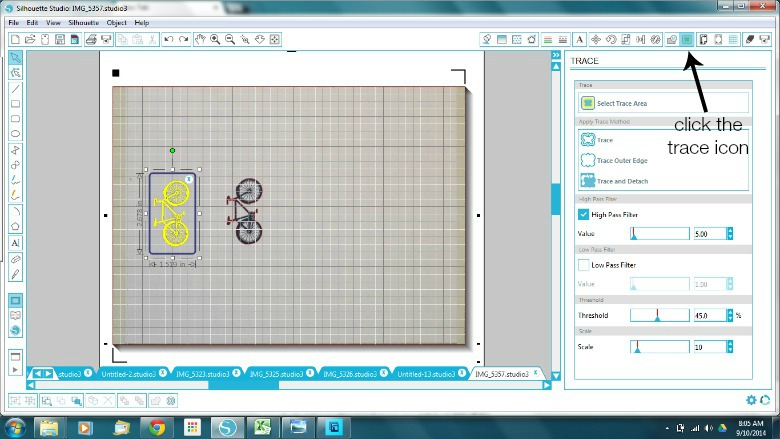 In order to cut your image out, you have to trace a cut line around the image.  There are a few different ways that you can choose to cut your image out, but they all have to follow the first step of tracing.  Click the trace icon where the arrow is pointing.  Then click the “Select Trace Area” button.  You’ll go to your image and draw a box around the area you want traced.  With this picture, I could have selected both images at once to trace them, but I wanted to trace them both differently. 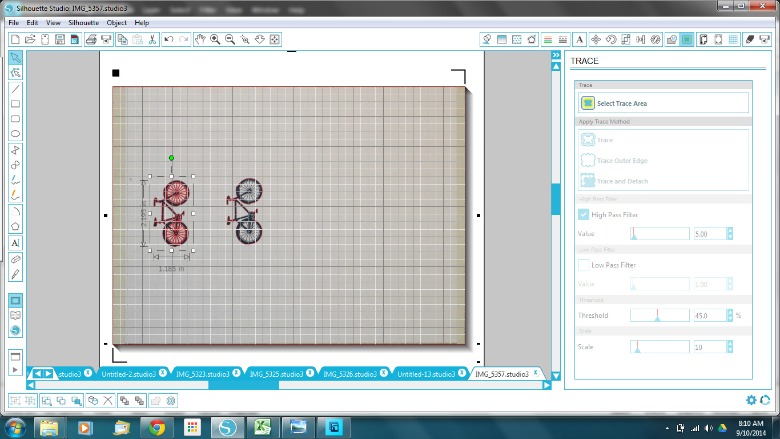 Once the box has highlighted your image, you’ll chose how you want it to be traced.  For the image on the left, I selected the “trace” button.  For the image on the right, I selected the “trace outer edge” button.  The trace button will trace a line inside every nook and cranny.  The trace outer edge does just what the button says.  It traces the outside of the image. 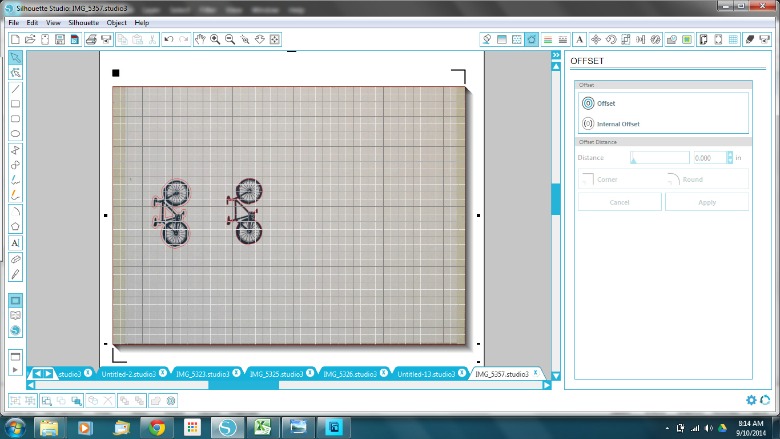 For the image on the right, I chose to cut the image precisely on the border.  For the image on the left, I wanted my cut to be offset from the border.  I highlighted the image and clicked the offset icon, which is the on the bottom toolbar to the far right (little circles).  It immediately creates an offset border.  You can change the distance that you want the line to be offset on the right hand sidebar.  There will still be a trace around the exact image, so what you’ll need to do is right click on the image.  Choose “group”, then right click on the image again and choose “weld”.  This will create your offset cut line.

I then set my cut settings to the cardstock setting and sent it to my Cameo to cut. 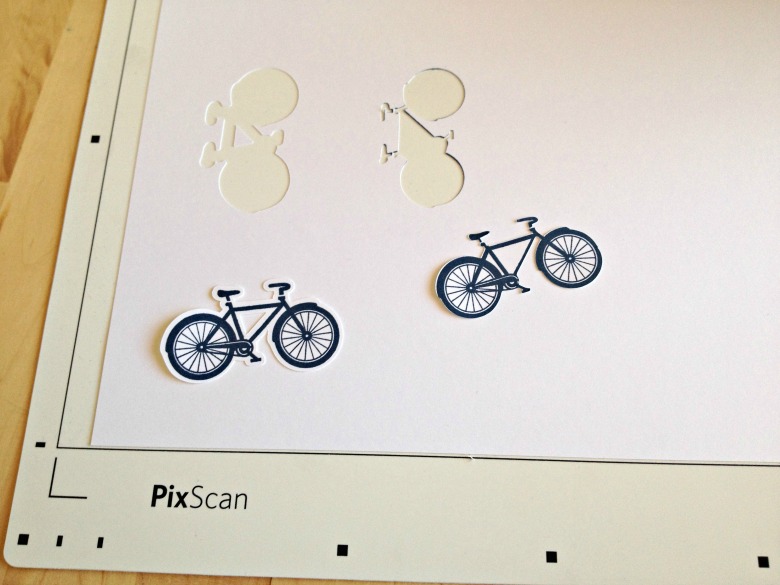 You can see that I was left with two perfectly cut images, just how I wanted them!  This feature opens up so many possibilities for me!  I have so many stamps that I would never use because I didn’t have a punch to use with them, or I didn’t want to spend tons of time cutting around the stamped images.  The PixScan feature gives me a perfect cut, exactly where I want it!  Like I said, this tutorial may feel a bit long, but when you actually go and set up your cut, it only takes minutes.  I am beyond excited that I learned how to use this new feature and I hope that you found my tutorial helpful.  If there are any steps that you are uncertain of or have any questions at all, I’ll do my best to answer them!  I’d love to hear if you tried it out and what you think!  If you’d like to purchase your own Silhouette PixScan Mat, you can purchase them online at Silhouette America {affiliate link}.