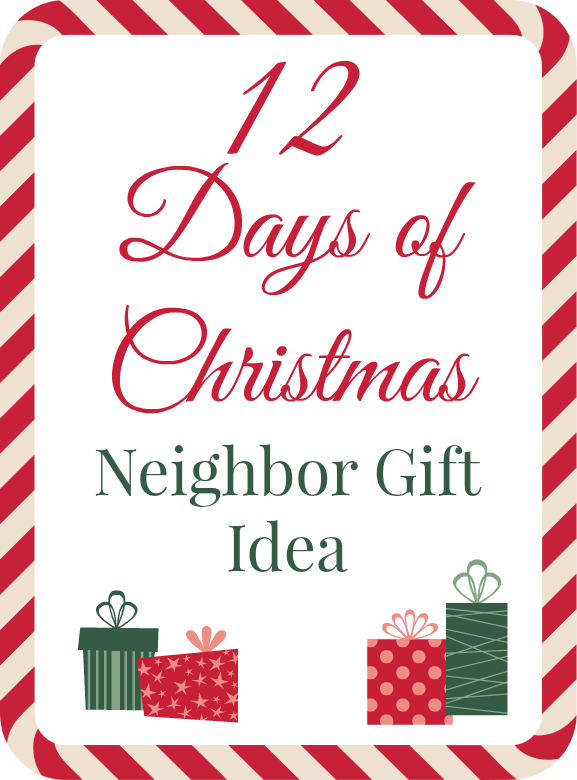 I have got the most amazing gift idea to share with you all today!  We received this gift during our first Christmas in our new house and we loved it!  To give you a little backstory, this happened back in December of 2011.  It was around 8:30 at night, my boys were sound asleep in bed, and I was sitting on the couch talking to my husband who was on shift at the fire station.  Suddenly, someone knocked on our door in such a way that I thought the police were forcing their way in.  To say it scared the crap out of me would be an understatement!  I was glad I still had my husband on the phone in case I opened the door and someone was standing there with a gun.  I have a bit of a wild imagination sometimes.  Anyway, I peeked through the blinds to see a car driving a way.  I opened the door to find a tin of Hershey’s kisses.  My heart was still racing, and the tin of candy had me seriously perplexed.  It also came with a note that said “On the first day of Christmas…”  It took a few minutes, but I finally realized we were the recipients of a kind series of gifts.

I’ll have to beg your forgiveness in advance for the poor quality of these photos.  I was long before I became a blogger and before I had ever heard of Pinterest, so I didn’t take pretty, staged photos:) 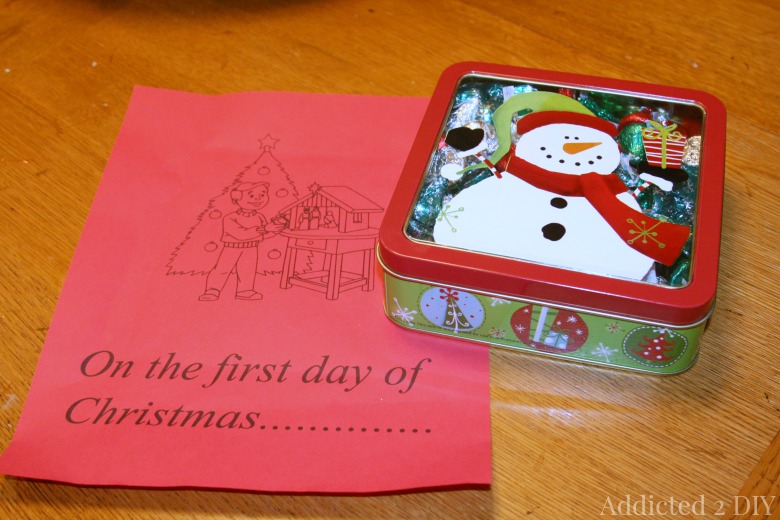 Night one was the tin of Hershey’s Kisses and this little note. 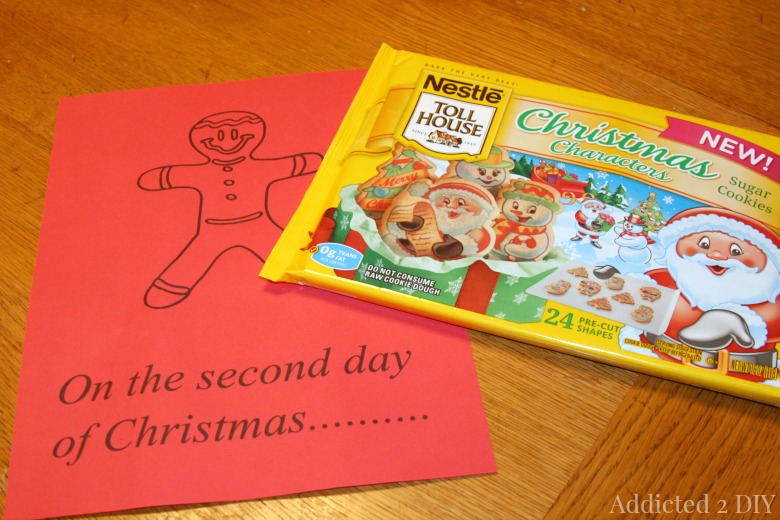 On night two, they dropped off two packages of refrigerated cookie dough. 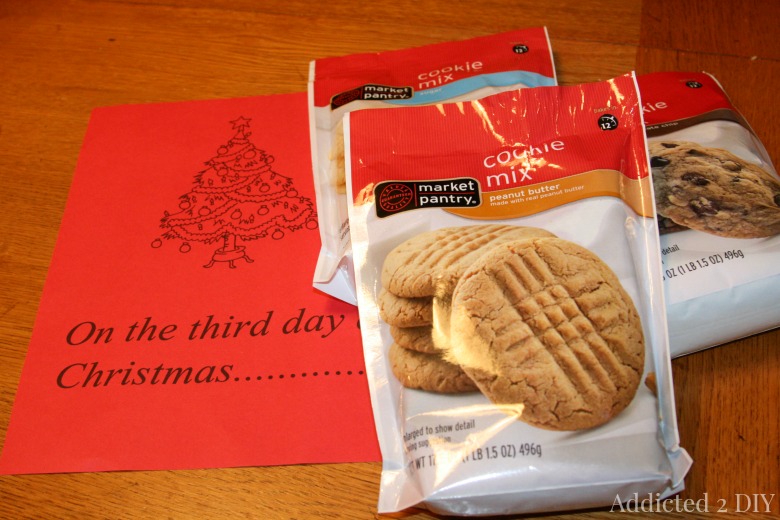 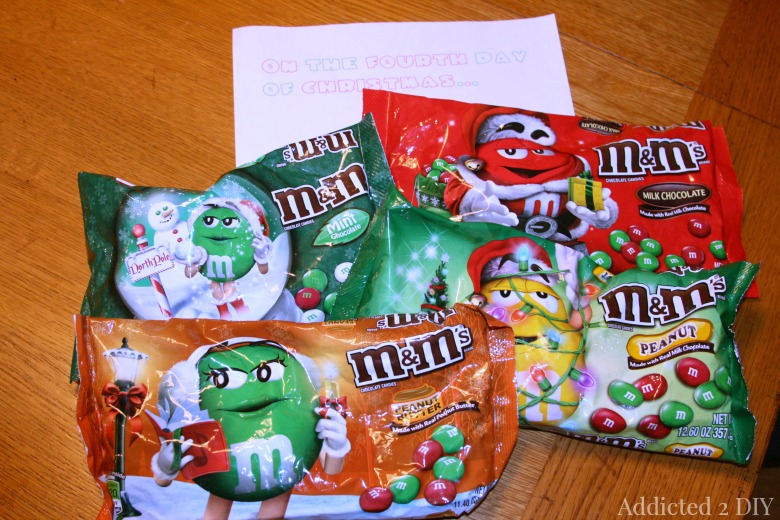 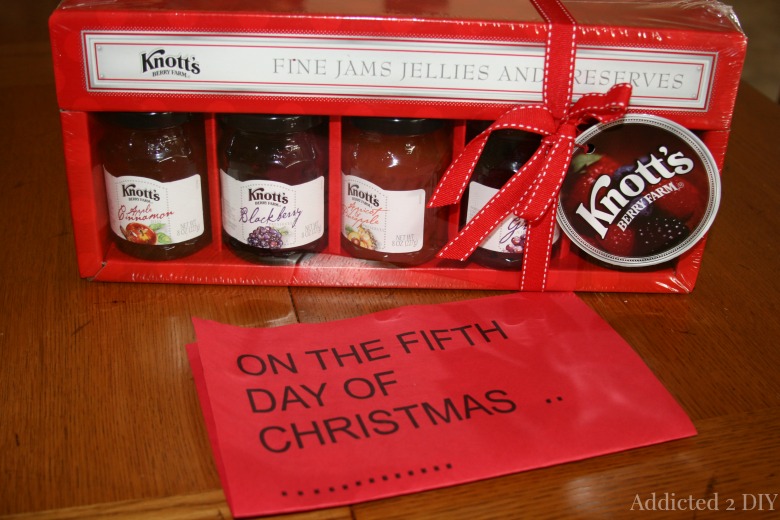 Night 5 was a case of 5 jams and jellies.  Are you seeing a theme here?  We started to wonder exactly what they would do for the next several nights.  By night 12, we thought there would end up being a huge basket of stuff! 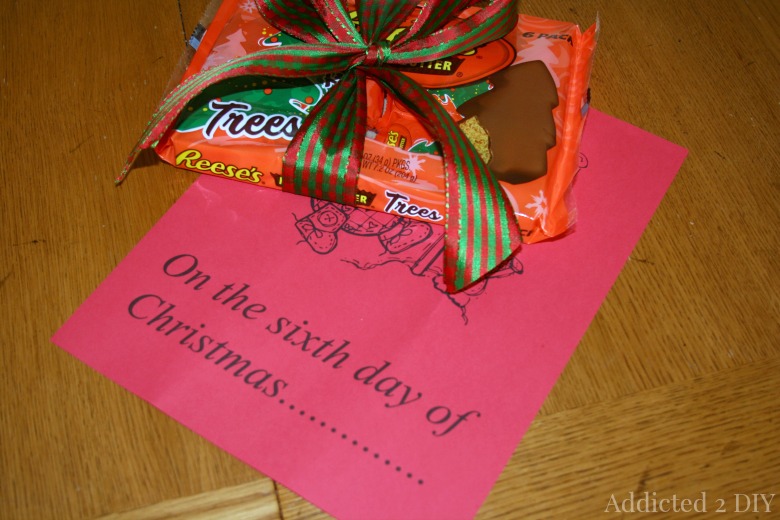 The 6 pack of Reese’s peanut butter cup trees was a cut way to represent the 6th day of Christmas. 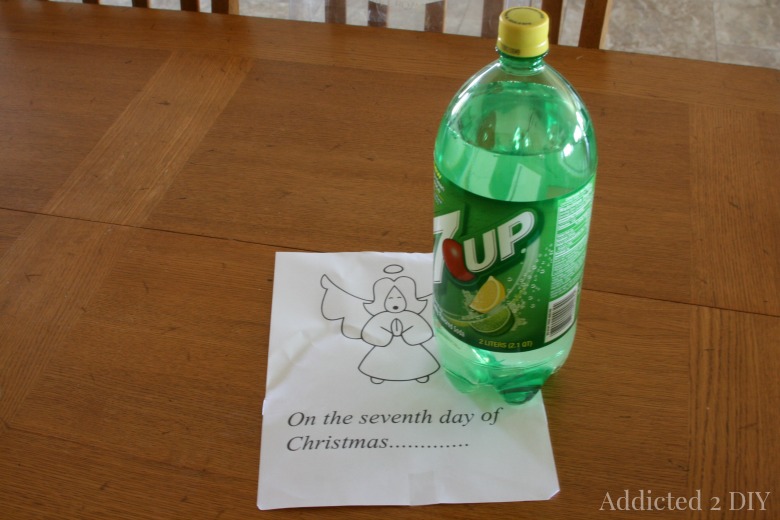 And how creative to use a bottle of 7Up for the 7th day!?  By this time, all of our friends and family on Facebook were absolutely loving seeing what I posted each night.  They began to look forward to it and would even send me subtle reminders if I had forgotten to post one;) 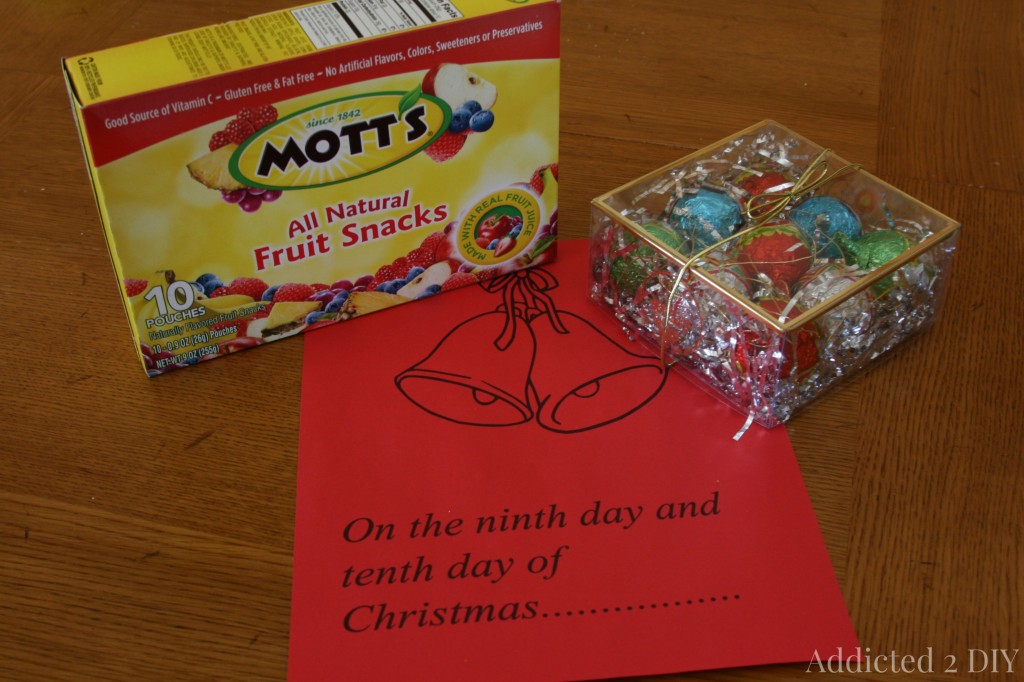 Somehow I either lost the picture of the 8th day or forgot to take one.  They didn’t drop anything by on the 9th day, so they doubled them up on the 10th day.  Once again, they got creative and dropped off 9 chocolate ornaments, and a 10 pack of fruit snacks. 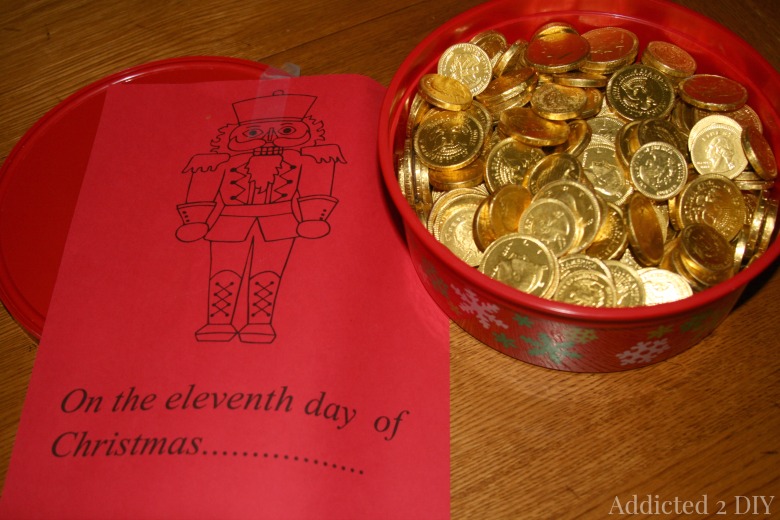 On the 11th day, we got a tub full of chocolate gold coins.  I once again either didn’t take a picture of the 12th night, or I forgot.  Either way, this was probably one of the funnest Christmas gifts we’d ever received.  None of our friends in the neighborhood had a clue what was happening or who would have been dropping these gifts off.  I ended up figuring it out and confirmed it several months later.  These particular neighbors loved the idea of making us feel welcome during our first Christmas in the neighborhood.  It definitely did and my boys certainly loved all of the presents we got each night.

For the 12th night, I decided to leave them a gift too, so I baked some cookies using the mix they gave us and left them a thank you card on our doorstep.

If you have new neighbors or if you want to do a random act of kindness and spread some Christmas cheer to one of your lucky neighbors, this is a fantastic gift idea.  It does take a bit of a commitment, but it is guaranteed to bring smiles to the faces of the lucky recipients!  Plus, you can customize it any way you like!  This year, my boys want to perform a random act of kindness to one of our neighbors, and I’m thinking this would be the perfect way to do it!